Ad spending on Facebook has mostly bounced back after slumping from March to May this year in the wake of the Cambridge Analytica scandal, according to a C3 Metrics analysis.

However, advertising ROI, calculated as attributed revenue dollars converted from advertising dollars spent on Facebook, has not recovered. ROI on Facebook advertising decreased from an index value of 2 in April to below 0.5 from May to August, according to C3.

"Because of the advertising data scandal surrounding Cambridge Analytica and Facebook's own TV campaign highlighting its error, consumers are far more suspicious of brands advertising on Facebook than ever," Jeff Greenfield, COO at C3 Metrics, said in a statement. "Between this…increased spend and competition for eyeballs coupled with lower ad load in FB feeds, advertisers are no longer seeing the ROI from Facebook they once enjoyed." 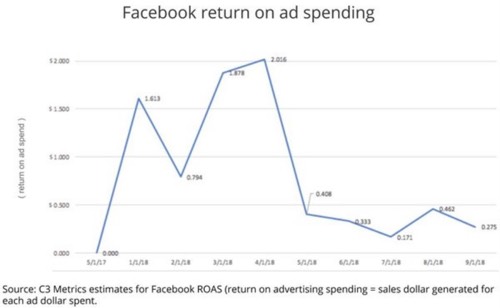